skip to main | skip to sidebar

Kennedy is currently the person heading up the Jiko project at ACREST. He arrived at ACREST in October of 2008 and started working on the stoves, which are called liners. He has made 98 liners; 12 cracked because of the gauge. He is also heading up the construction of the “better born kiln” (to be written about in another blog entry) for the mass firing of the jikos. They sold the first jikos in February of 2009 and have sold about seventy since. Recently, the main tasks have been collecting clay for the stoves from a riverbank, drying and sifting the clay, constructing the kiln, and production of the stoves. Right now, there are 88 more stoves ready to be burned and 64 ready for the metal cladding.

In one week, five people can make 100 energy-saving stoves. So in one month, you can get 400 energy saving-stoves, although it depends on weather. You must do your best on mixing and production so that you get 100% quality in all areas.

TO THE LEFT ARE PHOTOS OF THE PLACE WHERE THE CLAY IS SIEVED AND THE LINERS.
The kiln is used to fire the stoves, but it is small, so it can only fire 150 stoves at once. The kiln was flooded with water because it is next to the river, so ACREST can only use it to fire stoves during the dry season.
PHOTOS ABOVE, CLOCKWISE FROM TOP LEFT: A large jiko, which would be used in a big building such as a school or hospital, next to two smaller jikos; the existing kiln; the existing kiln when it floods; construction of the new kiln
Posted by Cecilia at 3:21 PM No comments: 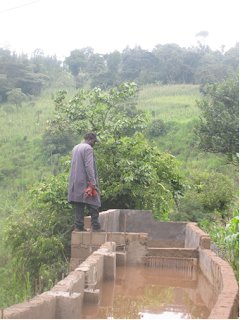 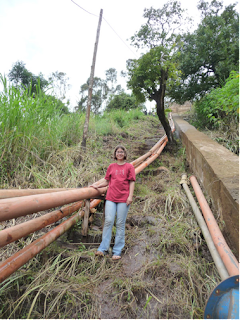 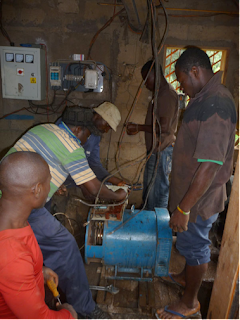 Mary and I are students from MIT who are interning with ACREST for the summer of 2009. Our projects are focusing on water pumping technologies mainly for dry-season farming but since arriving in Bangang we’ve had a wide introduction to the various activities taking place at ACREST.

Part of ACREST’s current focus is on micro- and pico-hydro projects that make use of the flow of the Mii River. They have been through a few generations of the system, and the staff is now working on two generators that will provide 50 kW and 100 kW of power, fondly called “the machines” by the ACREST staff.

On one of the first mornings that Mary and I arrived here, we walked with Arsene and Gilbert along the road following the ACREST-installed electric lines that led us to the micro-hydro project. The first evidence of the micro-hydro project was a low-head dam and diversion that reroutes a portion of the water away from the impending waterfall. The dam and diversion were begun over a year ago, but the wall supporting the diversion collapsed a few months ago due to erosion, but ACREST had recently finished repairing it.

Following the diversion, we were now at the top of sharp steps cut into the clay that led down to the generator house. The steps snake along the same path as the water pipes and the elevation drop provides about 20 m of head to the turbine.

It was an exciting day and most of the staff had gathered at the site because they were testing the 50 kW generator. A group of workers were crowded into the generator house. The signal was given to open the gate to let the water run through and to let the turbine spin.

The turbine kicked into motion and the belt connecting it to the generator vibrated furiously. But soon it was obvious that the turbine could not get up to speed, and the problem was pinpointed by the electrician Momanyi as being a short-circuiting diode in the generator. The test was finished for the day as the diode needed to be repaired.

Later in the week after the diode had been replaced, the 50 kW generator was tested again, but this time it was shown that the flow rate coming in through the four inch diameter pipes was not great enough for this particular generator and that it needed to be downsized and replaced with a 10 kW generator.

A few other problems with leakages in the pipes and in the generator house need to be corrected before the crossflow turbine and 100 kW generator are tested. ACREST describes itself as being in its research phase. It is still testing and prototyping many appropriate technologies and is forming plans for wider dissemination in the future.

The power from these micro- and pico-hydro plants is a key part of their plans for future growth. ACREST would like to generate enough power to expand and run their machine shop to full capacity which will in turn provide a means for the increased production of appropriate technologies for the surrounding area.

ACREST is expanding their micro- and pico-hydro projects and plans to construct their own turbine and generator to be installed at another site along the Mii.

Photos (clockwise from top): Mary climbing the steps that follow the water pipes; Momanyi, an ACREST staff member, walking along the diversion wall; ACREST staff in the generator house testing the diode.

Posted by Cecilia at 5:12 AM No comments: